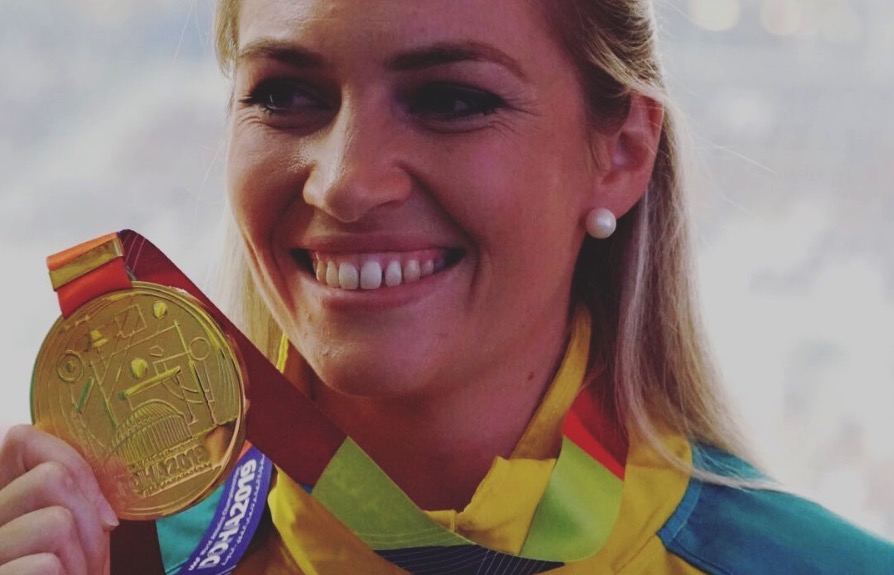 Our land may be girt by sea, but tonight, at approximately 8:20pm, I was girt in a sea of green, as Kelsey-Lee Barber stepped onto the podium to receive her Javelin gold medal.

We stood there, arm in arm, and belted out a national anthem that would make Tina Arena proud. A moment I’m sure many in the team will never forget, let alone KLB, who stood atop the podium as Advance Australia Fair blasted through Khalifa Stadium.

A post shared by Athletics Australia (@athleticsaustralia) on Oct 2, 2019 at 1:04pm PDT

This day started a little different that normal though. It began with a desert tour of Qatar.

We were bundled into some four wheels drives and we headed south-east for some dune bashing fun. Our drivers were native Qatari locals, dressed in the traditional thoub and Ghutra. This gave us a little peak into the hierarchy in Qatar. As we were making our trip south, our driver pulled into the supermarket parked outside, and beeped his horn. A worked shuffled out as our driver wound down the window, handed over some money, and waited in the beautiful air-conditioned car. Moments later, the worked popped back out with a packed of ciggys and some change. I’m wondering if this technique also works in Australia. Maybe when I get home, ill drive down to the local IGA, give the horn a toot and hope someone with bring me some bread and milk.

If you look at a map of Doha, zoom out and look south. You’ll find a spot where a road just ends. That’s where the adventures begin! We let the air out of the tires and hit the rolling sand dunes.

Our drivers definitely had a sense of adventure as we were bashing through the dunes like a wrecking ball. Drifting and sliding with precision off some the steepest dunes I’ve seen. The more we laughed the more he bashed, sometimes giving us the classis “look mum, no hands” as we were fishtailing our way across the desert.

Before we knew it, we’d actually travelled a far way south, and during a stop someone asked, “Which way is Saudi Arabia?” and the driver responded with “on a clear day, it’s just there”. Next minute, we’re atop a gigantic dune, on the precipice staring straight down and the driver announces, “that’s Saudi Arabia right there.” We pull up a map and we are literally sitting on the border between two countries that aren’t too friendly with each other. We appear to be driving away from the dune edge, until the driver throws the 4×4 in reverse and we plummet backwards down the side off this humongous dune.

We finally get to a rest area “Desert Camp” which is an amazing set of tents and deck chairs right on the Arabian gulf. The water was stunningly blue and quite warm to the touch. This was also our opportunity for a quick camel ride, and when I say quick, I mean probably 80 metres all up. Pretty quick sesh but I kind of got the gist of what camels were about.

After some light refreshments, we got to making our way back to the city. We were making good time and some other vehicles came into view. We were gaining on them, so someone asked, “How fast are we going?” to which I replied “130kmph!”. Gunning along the sand at a speed that would get your license shredded up on the spot a quite the feeling ill let you know.

If you’re ever in Doha, hit the dunes.