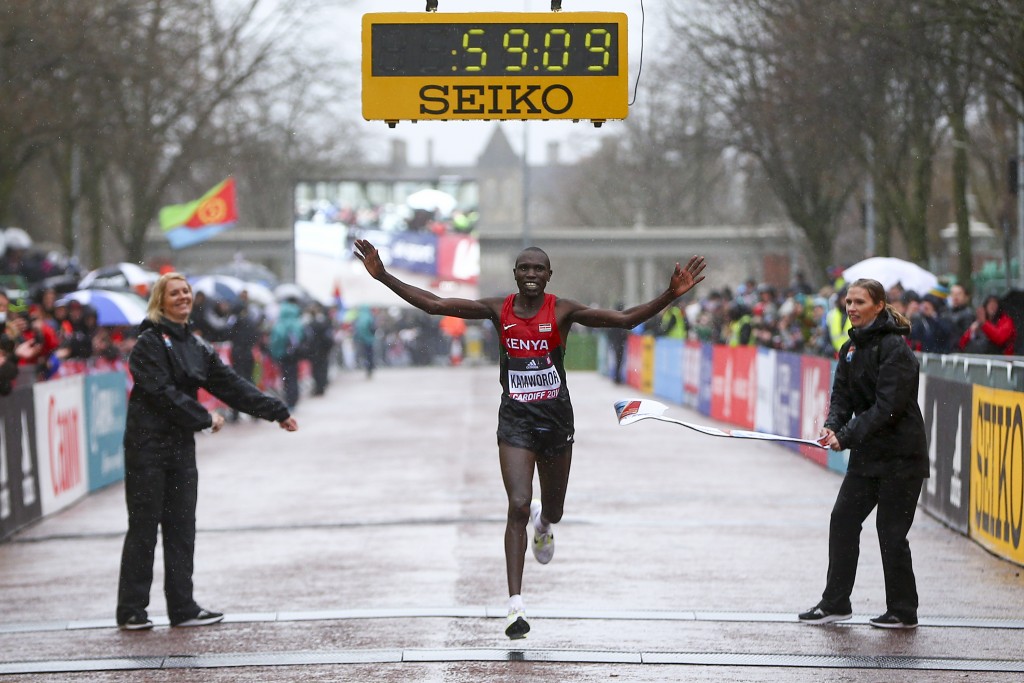 At the 2016 World Half Marathon Championships, held in Cardiff, Wales, young Geoffrey Kamworor gave the running community an object lesson in keeping calm during a crisis. The Kenyan upstart came into the race having talked a lot of smack about one fellow competitor, Mo Farah, who was almost universally recognized as the best runner on the planet and whom Kamworor had never beaten, only to slip and fall on the start line and get trampled by a handful of the thousands of amateur runners stampeding from behind. After spending the longest seven seconds of his life sprawled face-first on the tarmac, Kamworor got up, barged through the scores of slower runners now in front of him, caught Farah and the other leaders around 1 kilometer, and went on to win the race.

It was a remarkable feat that caused a sensation among running fans that was stoked in part by the serendipitous existence of a video clip capturing the early moments of Kamworor’s recovery. Checkout US real money casino here. It wasn’t merely a remarkable physical feat, however. There can be no doubt that Kamworor won the race despite his traumatic fall not only because he’s really fast and fit but also because he didn’t panic.

I believe that the ability to stay calm under stress is one of the most important psychological characteristics of successful endurance athletes, and that the lack of this ability—in other words, a susceptibility to panic—holds athletes back more than just about any other mental trait.

The panic mechanism, as scientists refer to it, is natural and universal. As psychologist Randolph Nesse wrote in a 1987 paper titled “An Evolutionary Perspective on Panic Disorder and Agoraphobia,” “Panic, when viewed ethologically, is not pathological in itself; it is rather an adaptation that evolved to facilitate escape in dangerous situations.” The problem is that panic is only useful in situations of mortal danger, yet most of us also panic in less serious situations that are not helped by this response, including a variety of stressful situations that we face as athletes, such as bad workouts, injury, and mid-race setbacks like flat tires.

High-performing endurance athletes are typically slow to panic, as Geoffrey Kamworor was at the 2016 World Half Marathon Championships. After the race, he said of his disastrous start, “It was really tough after that fall to catch up but I fought hard.” This terse description of how Kamworor experienced the race from the inside is almost laughably banal, but it perfectly conveys the take-it-in-stride mentality that he used to make the best of a bad situation. Contrast this demonstration of poise under pressure to my own behavior in the 1987 New England High School Cross Country Championships, in which I hit the deck early and, despite rising and continuing, remained rattled by the fiasco through the remainder of the race, unable to put it behind me and make the best of my own bad situation.

I’ve been using the term “panic” rather loosely. A true panic response lies at the very extreme of the spectrum of anxiety states. Far more often than we panic, endurance athletes experience anxiety. But even these episodes are frequently out of proportion to their cause and make the overall situation worse instead of better. Another personal example involves my swimming. I’m working hard to improve my swimming for an upcoming Ironman, and although I have made a fair amount of progress over the past few months, I have good days and bad days in the pool. Last Wednesday, in fact, I had another a bad day, and I failed to keep calm, instead becoming so frustrated by and obsessed with figuring out why I’ve gone backwards that I abandoned my planned workout and spent the rest of my time in the pool tinkering around with my technique, which never works. I’m quite certain that if I were less emotionally thrown off by such setbacks, the arc of my improvement would be smoother and I would enjoy the process more.

How does one get better at staying calm in the face of crisis moments in training and racing? I think it’s all about intentionality. The essential trigger of anxiety in these situations is surprise. We are caught off guard by an unexpected turn of events and don’t know what to do. While you can never know in advance that you’re going to fall down at the start line and be trampled by dozens of your fellow runners, you can develop a sort of general readiness for and way of responding to such scenarios.

Psychotherapists treat diagnosed cases of panic disorder by recreating the symptoms repetitively in a controlled manner. This teaches the patient that the symptoms are not dangerous and that the patient has a certain amount of control over them. You can do something similar in the athletic context by training yourself to recognize that you are experiencing an anxiety response to a stressful situation. This puts you outside the response to a degree and allows you to make choices that you would not be able to make if you responded reflexively, simply acting on your anxiety.